CIK intends to create an intellectual atmosphere for scholars and practitioners to create theoretical and applied knowledge on management sciences and economic development and growth, and related disciplines. 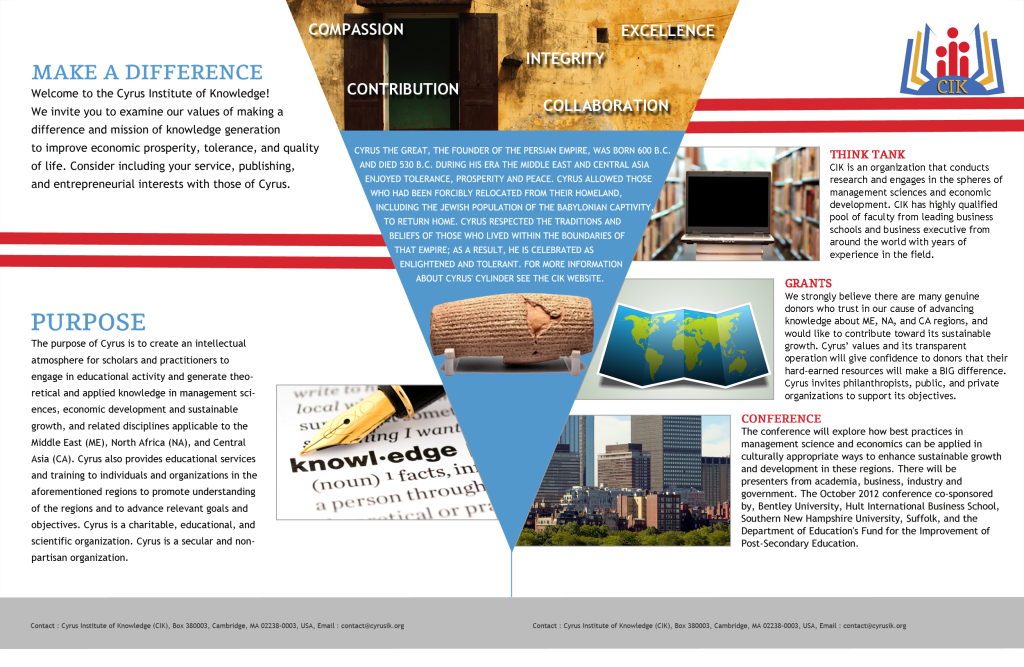 The purpose of CIK is to create an intellectual atmosphere for scholars and practitioners to engage in educational activity and generate theoretical and applied knowledge in management sciences, economic development and sustainable growth, and related disciplines globally. It will also provide educational services and training to individuals and organizations to advance their goals and objectives. CIK is an educational, scientific, and non-profit tax deductible organization. It is a secular and nonpartisan organization.

CIK intends to create an intellectual atmosphere for scholars and practitioners to create theoretical and applied knowledge on management sciences, economic development, and related disciplines.

CIK offers educational development programs and services to help individuals and organizations to advance their goals and objectives.

Passion: We are enthusiastic and passionate in advancing knowledge. Our goal is to enrich human resource strengths and potential growth.8

Commitment: We live by strong commitment to create an institute that strives in supporting scholars, businesses, and organizations to succeed.

Excellence: Our ambition is to seek in delivering the highest levels of quality work! We lead by example to achieve our vision and goals and we work hard to exceed it.

CIK’s competitive edge is the areas of specialization, knowledge, and interest of its members and their cultural awareness about the regions.

Cyrus the Great, the founder of the Persian Empire, was born 600 B.C. and died 530 B.C. Due to his efforts and under his rule, the Middle East and Central Asia enjoyed tolerance, prosperity and peace. Cyrus allowed foreigners who had been forcibly relocated, including the Jews of the Babylonian captivity, to return home. Cyrus respected the traditions and religions of those who lived in his country; as a result, he is celebrated as enlightened and tolerant. For more information about Cyrus’s Cylinder, click here.

A hallmark of Cyrus’ administration was religious freedom and a respect for the customs of ethnic minorities, a fact acknowledged by ancient Jewish historians. Combining these missions with Cyrus’ wise and fruitful economic policies, the Middle East and Central Asia emerged as a pinnacle of early civilization. A great man who also harboured a spirit of humility, Cyrus asked to be buried in earth, rather than encased in silver or gold.

It is appropriate to have a quotation from Cyrus the great here which says “…I was never the plaything of fear or greed. Thought I had the advantage of royal birth, it was through my own efforts that I reordered the world as I wished it to be, and conquered far more by the force of my mental powers than by the strength of my sinews.”(Larry Hedrick, 2006). Knowledge is Power.

A man of many achievements in life, in death he acknowledged he was a man, like any other, and insisted on being treated accordingly. This empathy for all humanity marks Cyrus’ greatness and inspires us to recall his achievements when we attempt, in some small way, to contribute to the knowledge generation, peace, and prosperity of the Middle East, North Africa, and Central Asia. Read more…

Cyrus the Great, The Art of Leadership and War, by Larry Hedrick, 2006.